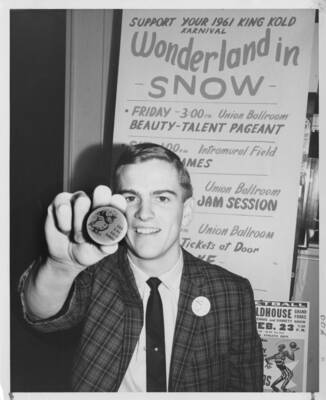 Bob Nelson holds up a King Kold Karnival event button. A large poster with the Karnival's schedule of events and a poster advertising the Harlem Globetrotters hang behind him. Nelson was selling the buttons for the Blue Key Honor Society. The winter festival known as the King Kold Karnival was a staple at UND from 1951-1968. The event usually included contests, sled races, dances, beauty pageants, and most notably large snow sculptures. A brief resurgence emerged in 1979 but was not continued.