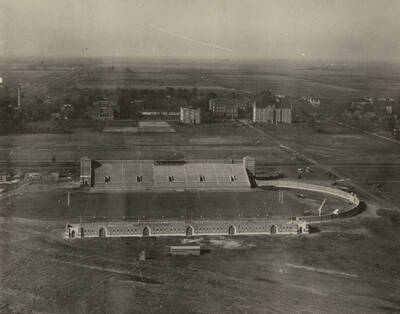 An aerial view of Memorial Stadium looking towards the west. Buildings on campus from left to right are the Carnegie Library Building, Babcock Hall with Budge Hall behind it, Old Main, The Arts Annex, Old Chemistry, Woodworth Hall with Old Science behind, and the Law Building. Memorial Stadium was built in 1927. It originally contained the dismantled wooden grandstands of the former university athletic field that seated 3,000 people. New bleacher seats were added in 1936 with additional seating added on the west and north ends bringing capacity to over 8,000 people. The first football game was the Homecoming Game against Creighton in October 1927. Football continued to be played here until 2001 when games moved to the Alerus Center. The Memorial Stadium is used today for Track and Field and intramural sports.