May Fete - The Triumph of the Prairie, John and Jane 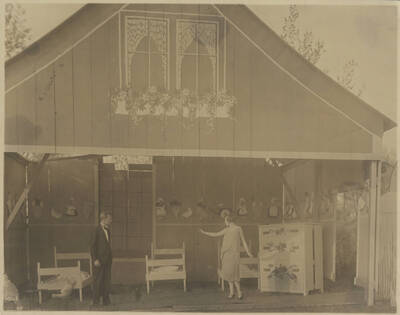 John and Jane stand in their farm house from the 1925 May Fete. The home is furnished with three beds, a dresser and several toys. John is played by Meryl Griffith and Jane is played by Marie Lysing. The May Fete was a modest production from 1909-1916 until Nell Martindale took over as head and expanded the small show into a spectacular dance-drama. From 1917 to 1927, May Fete saw elaborate sets and as many as 500 performers. The last May Fete was in 1927 when Martindale resigned to be married.