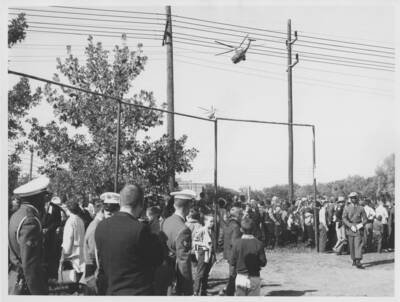 Spectators and military officers linger after the President's helicopter and another helicopter depart from UND campus. The people stand around a baseball backstop. The athletic fields were used for take-offs and landings of the helicopters. President Kennedy spoke to nearly 20,000 people in the UND Fieldhouse on September 25, 1963 regarding conservation in America as well as in North Dakota.