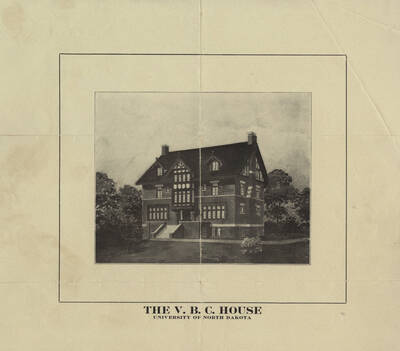 A preliminary sketch of the Varsity Bachelor Club House in 1909. The house was originally built in 1910 as the home of the Varsity Bachelor Club. It was the first chapter house built and owned by any fraternity at the University of North Dakota. In 1913 the club obtained a charter from Phi Delta Theta. During WWI their house was used as an Army Headquarters and also converted into a hospital during the 1918 influenza epidemic. Members of Phi Delta Theta continued to live in Bachelor House until 1979 when the University purchased it. The building was renamed Gustafson Hall, after Bernard Gustafson, and became the Center for Continuing Education.