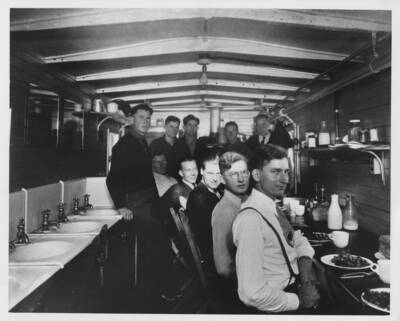 Ten male students gather in one of the two kitchen cars for a meal at Camp Depression. Sinks and mirrors are in place at the left and a dining table and chairs at the right. A stove is likely behind the standing students with an exhaust fan running through the roof. Shelves with condiments and supplies are in place above the dining table and to the right of the mirrors. By 1933, The Great Depression had made it nearly impossible for many students to afford room and board. In response, the University obtained ten caboose cars from the Great Northern Railroad, erecting them into a quadrangle of connected housing east of the powerhouse. Camp Depression housed about forty men who worked at various campus jobs to cover expenses from 1933-1941. The cars were equipped with running water, heat and electricity. The onset of World War II decreased the student housing demand and the Camp was removed soon after.