May Fete - Festival of Dionysus, The High Priestess 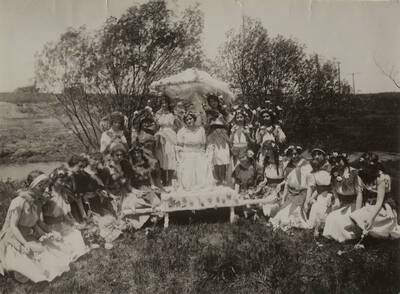 Student-performers of the 1919 May Fete production wearing flower petal costumes. The High Priestess of Dionysus seated on the carrying platform is identified as Grace Laughlin. The English Coulee is seen behind the performers. The May Fete was a modest production from 1909-1916 until Nell Martindale took over as head and expanded the small show into a spectacular dance-drama. From 1917 to 1927, May Fete saw elaborate sets and as many as 500 performers. The last May Fete was in 1927 when Martindale resigned to be married.