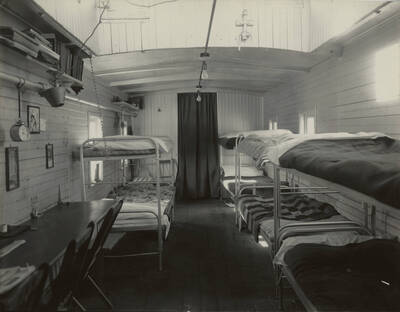 A sleeping car in Camp Depression in 1935. Eight sleeping spaces are in place among four bunk beds. A table is in place by support chains attached to the ceiling. A lamp and alarm clock are attached to a steam pipe that runs the length of the car. Books are placed on a shelf above the desk and the top left corner of the car. A curtain serves as a door to the next car. By 1933, The Great Depression had made it nearly impossible for many students to afford room and board. In response, the University obtained ten caboose cars from the Great Northern Railroad, erecting them into a quadrangle of connected housing east of the powerhouse. Camp Depression housed about forty men who worked at various campus jobs to cover expenses from 1933-1941. The cars were equipped with running water, heat and electricity. The onset of World War II decreased the student housing demand and the Camp was removed soon after.