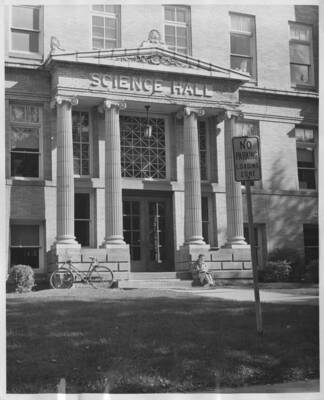 A woman sits on the concrete stairs of the west entrance to (Old) Science Hall. A bicycle is rested against the base of the fluted ionic pillars. A concrete sidewalk connects the entrance to another sidewalk. A sign on the lawn reads "No Parking Loading Zone." Completed in 1901, Science Hall absorbed UND's museum and laboratories from Main. Science Hall originally held Engineering in the basement, Physics and Mathematics on first floor, Chemistry on second floor and Biology with the museum on the third floor. On September 26, 1905, The School of Medicine opened its doors and occupied portions of the building's second and third floors until 1948. After that, Science Hall provided a home for the Public Health Laboratory (1949-1973) and UND's radio station KFJM, besides other entities. After some debate it was decided that Old Science be razed in 1999 due to structural concerns. Its fluted ionic columns are displayed in the Barnes and Noble bookstore and the pair of inner doors from the main entry provide entry to the Elwyn B. Robinson Department of Special Collections , Chester Fritz Library.