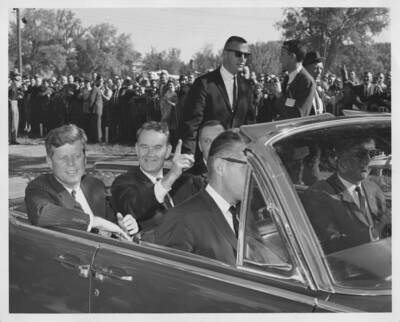 A convertible carrying President John F. Kennedy, Senator Quentin Burdick (holding up a "number one") and Governor William Guy travels toward the UND Fieldhouse. Secret Service Agents sit in the front of the car and walk beside it. Spectators line the street to see the President. President Kennedy spoke to nearly 20,000 people on September 25, 1963 regarding conservation in America as well as in North Dakota.