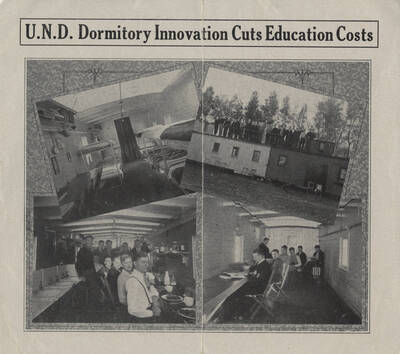 Four photos of Camp Depression grouped together under the heading "UND Dormitory Innovation Cuts Education Costs." The picture on the top left shows a basic living car with bunk beds and desks. At the top right, residents of the camp stand atop the adjoined rail cars. At bottom left are men in one of the two kitchen cars. At bottom right are residents in a study car. By 1933, The Great Depression had made it nearly impossible for many students to afford room and board. In response, the University obtained ten caboose cars from the Great Northern Railroad, erecting them into a quadrangle of connected housing east of the powerhouse. Camp Depression housed about forty men who worked at various campus jobs to cover expenses from 1933-1941. The cars were equipped with running water, heat and electricity. The onset of World War II decreased the student housing demand and the Camp was removed soon after.