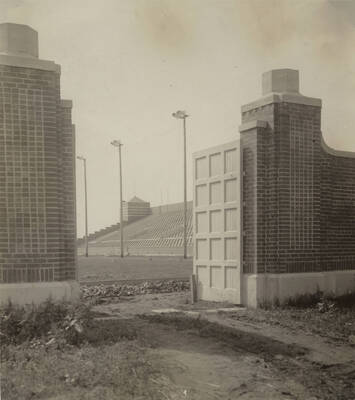 A view through the north gates of Memorial Stadium. Brick walls surround the north side with swinging wood gates providing an entrance. The main bleachers are seen inside with light poles along the sideline. Memorial Stadium was built in 1927. It originally contained the dismantled wooden grandstands of the former university athletic field that seated 3,000 people. New bleacher seats were added in 1936 with additional seating added on the west and north ends bringing capacity to over 8,000 people. The first football game was the Homecoming Game against Creighton in October 1927. Football continued to be played here until 2001 when games moved to the Alerus Center. The Memorial Stadium is used today for Track and Field and intramural sports.