May Fete - Wizard of Toyland, Queen and Knave of Hearts 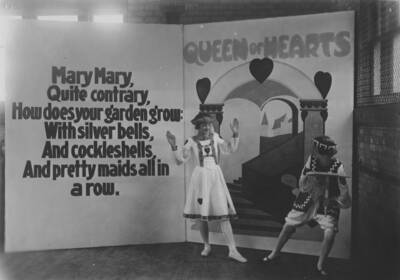 Two student-performers of the 1922 May Fete stand in front of a large Mother Goose Book background inside the women's gymnasium. The Queen of Hearts is played by Grace Clark and the Knave of Hearts is played by Dagney Hassell. The May Fete was a modest production from 1909-1916 until Nell Martindale took over as head and expanded the small show into a spectacular dance-drama. From 1917 to 1927, May Fete saw elaborate sets and as many as 500 performers. The last May Fete was in 1927 when Martindale resigned to be married.