May Fete - Festival of Dionysus, Rehearsal 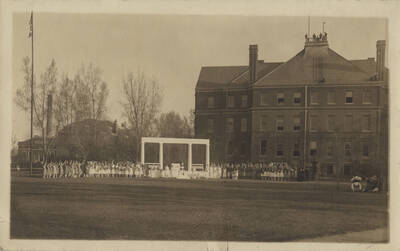 A photo of the 1919 May Fete rehearsal in front of the north side of Merrifield Hall. The large cast of students perform in front of a Greek pillar style set. The production directors are seated at the far right. Several on-lookers watch from the roof and windows of Merrifield. The Adelphi Fountain stands in front of Merrifield. At the left is a large flagpole. Budge Hall, the Carnegie Building, and the smokestack of the powerhouse are visible behind the set to the south. The May Fete was a modest production from 1909-1916 until Nell Martindale took over as head and expanded the small show into a spectacular dance-drama. From 1917 to 1927, May Fete saw elaborate sets and as many as 500 performers. The last May Fete was in 1927 when Martindale resigned to be married.