May Fete - Cinderella, The Wedding 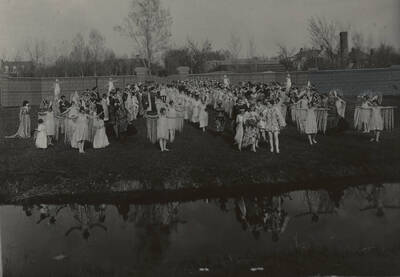 The Wedding scene from the 1923 May Fete production of Cinderella. Student-performers stand before the English Coulee at the Bankside Theatre. A large wall with gates is set up for a background. Buildings that are visible in the background from left to right are: President's House, Davis Hall, Chandler Hall, Macnie Hall and Chandler Hall smokestack. The May Fete was a modest production from 1909-1916 until Nell Martindale took over as head and expanded the small show into a spectacular dance-drama. From 1917 to 1927, May Fete saw elaborate sets and as many as 500 performers. The last May Fete was in 1927 when Martindale resigned to be married.