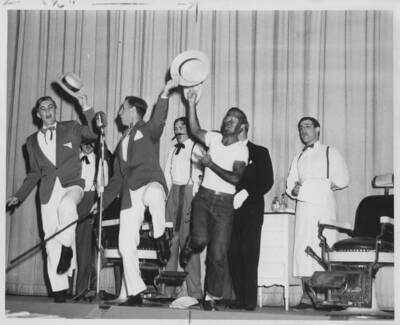 Lambda Chi Alpha performs "Watch Your Barber Cues" for the 1952 Flickertail Follies. Performers include Frances Schammel and Vernon Kester as the duet in front, John Reinbold as the shoe shine boy at front right, and Robert Jensen, Kenneth Hermes, Wayne Taylor, and Elywnn Nohr as the quartet in the back. Two barbershop chairs and counters are set up on the stage. Established by the Journalism Fraternity, Sigma Delta Chi, as a campus talent and variety show, The Flickertail Follies entertained the city of Grand Forks from 1925-1962. The Follies were, however, suspended from 1931-1935 due to The Depression and from 1941-1945 for World War II. The Follies gained national attention in 1950 when it was featured in "Life Magazine". The show was dropped in 1962 but was revitalized for one year in 1982.