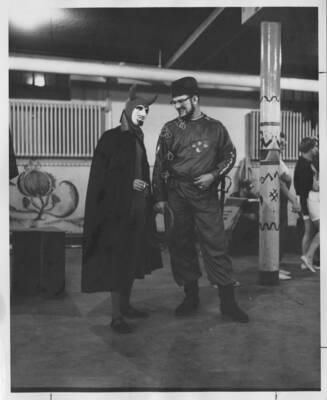 Two performers of the 1958 Flickertail Follies chat backstage. John Lundy plays the devil in Sigma Nu and Alpha Phi's "Judgment Day." Allen Larson plays the Russian guard, Balinski, in Beta Theta Pi's "Cheerie Siberia." Other performers prepare in the background. Established by the Journalism Fraternity, Sigma Delta Chi, as a campus talent and variety show, The Flickertail Follies entertained the city of Grand Forks from 1925-1962. The Follies were, however, suspended from 1931-1935 due to The Depression and from 1941-1945 for World War II. The Follies gained national attention in 1950 when it was featured in "Life Magazine". The show was dropped in 1962 but was revitalized for one year in 1982.