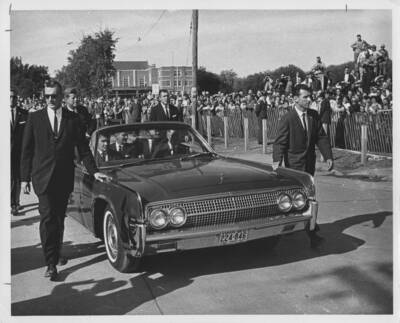 President John F. Kennedy's motorcade makes its way to the UND Fieldhouse. Secret Service Agents surround the 1962 Lincoln Continental Convertible. The President sits on top of the seat while Governor Guy and Senator Burdick sit in the back. Spectators look on from behind snow fences. The Memorial Union stands in the background. President Kennedy spoke to nearly 20,000 people on September 25, 1963 on conservation in America as well as in North Dakota.