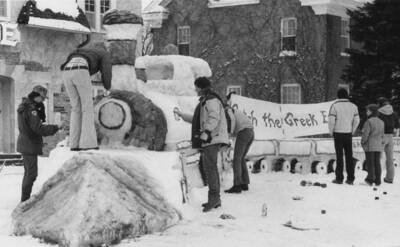 Members of Tau Kappa Epsilon Fraternity prepare their train snow sculpture for the 1979 King Kold Karnival. Five students are painting the sculpture while three others view the progress. The Kappa Sigma house stands in the background. The winter festival known as the King Kold Karnival was a staple at UND from 1951-1968. The event usually included contests, sled races, dances, beauty pageants, and most notably large snow sculptures. A brief resurgence emerged in 1979 but was not continued.