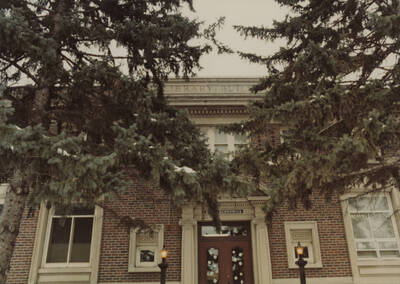 A photograph of the Carnegie Building in 1981. The front entrance has two lampposts and a sign which reads: "Home Economics" above the door. The Andrew Carnegie Foundation donated funds to build the Carnegie Building specifically for a library. The building became the University Commons in 1927. And, eventually became the Home Economics Department. In 2008, Carnegie is the home of Enrollment Services. (Information from UND Landmarks and Geiger pg 340-341).