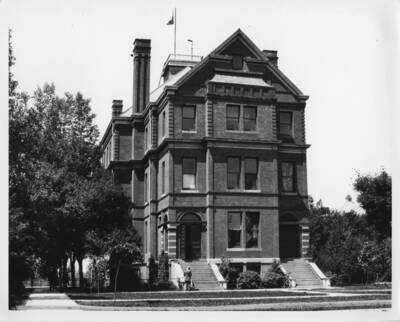 A picture of two men in front of Old Main circa 1918. One sits on the left most steps while the other stands. Old Main was the University's first building and served many purposes. UND laid the Cornerstone for Old Main on October 2, 1883. The building opened for student enrollment on September 8, 1884. The building first contained all recitation rooms, laboratories, the campus library, and offices. On June 16, 1887, a tornado destroyed the Western End of the building, and UND rebuilt Old Main in the exact way it had been previously. In 1912, Old Main became Merrifield Hall after UND President Webster Merrifield. However, in 1924, Old Main was condemned due to a rapid settling of the foundation. UND then removed the top two floors of the Old Main building. In 1930, Old Main still had inadequate foundations, and Merrifield Hall became the building it is today. Old Main became Old Main again until it was razed in 1963. In the same year, UND erected the Old Main Memorial Sphere on the same site where the building once stood. (Information from Chandler's History of All Buildings, and UND's History website).