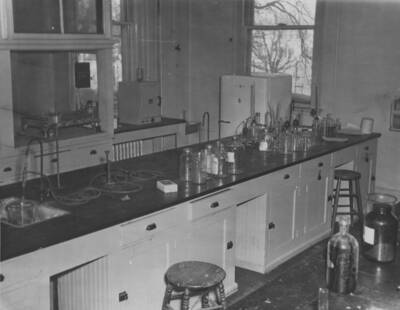 A Photograph of a chemical laboratory in Babcock Hall. The Laboratory table is covered with laboratory equipment including glass jars, test tubes, and Bunsen burners. The walls are lined with a refrigerator, a sterilizer, and two windows. The back of the photograph reads: "One of the small labs at Babcock." UND built the Mining Engineering Building in 1907 and was dedicated June 1908. In 1909, UND constructed two additions to the north and south of the building to accommodate ceramics and a mining experiment station. In 1910, a serious fire destroyed the northern third of the roof and caused extensive water damage to the north half of the building. On September 3, 1925, the building was named after Dean Earle J. Babcock. (Information from E. F. Chandler's History of All Buildings, page 7)