Students Holding a Kite at the Kent State Strike 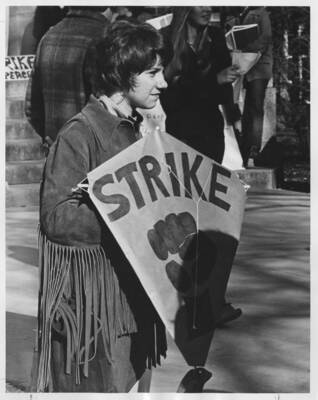 A female student holds a Kite at the Kent State Strike. May 4, 1970, members of the Ohio National Guard fired into a crowd of demonstrators at Kent State, killing 4 and wounding 9. The event "triggered a nation wide student strike." UND became a part of these strikes. On May 5, 1970, 500 people showed up for a rally, and 150 stayed for the Strike. The students had 8 demands: 1) An end to academic credit for ROTC; 2) An end to the military Governor's Day; 3) President Starcher demand an immediate end to the war in Southeast Asia; 4) Immediate halt to military recruiting in the Memorial Union; 5) Disarm the Campus Police Force; 6) Establishment of a people's bookstore as an alternative to the allegedly exorbitant one; 7) Student Control over Student activity funds; 8) Establishment of an Indian Cultural Center and an Indian Studies Program. The students used this time to skip regular classes and held "Libertarian Classes" which included protest poetry, ROTC, and the war tactics. (Information taken from The Dakota Student, May 7, 1970, and the Sociology Department at Kent State)