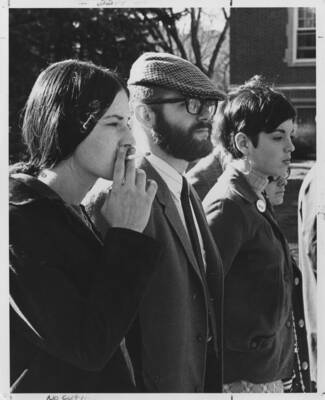 Standing outside the Memorial Union on a Friday at noon in November, 1967, the Vet's Club held a rally to "support Vietnam Servicemen." The large group broke into two groups. On one side the Vet's club and supporters stood to support the war and troops in Vietnam. On the other stood the "doves" as they called themselves. This group supported the troops but not the war in Vietnam. In spite of the disagreement, both groups stood silently as they flew flags and "appealed to conscience" and played "Star Spangle Banner." Shown here are some of the "doves." (Information from 1968 Dakotah Annual, pg. 40-41).