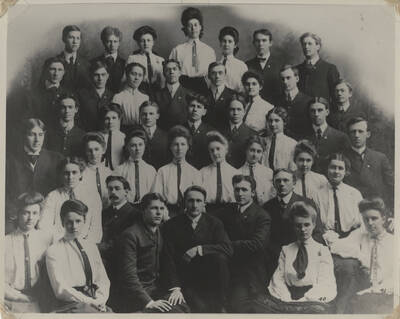 The Adelphi Literary Society sits for a group photograph in 1904-1905. In 1885, the Adelphi Literary Society became the first student organization on campus. The organization began as a group of men for the purpose of "literacy work and training in public speaking." In 1888, women were invited to join the society, which, "maintained a reading room, edited a newspaper, and even organized a Glee Club." The club remained active until the 1920's. But, in 1982, the club was revived and still remains. They also donated the Adelphi Fountain to the University in 1905. (Information from the 1904 Annual and UND's Factbook).