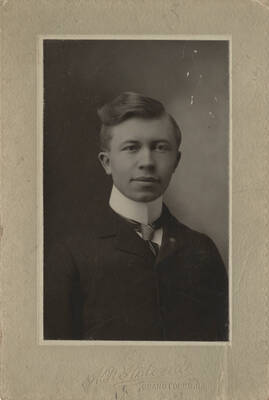 Vilhjalmur Stefannson (1879-1962) attended the University of North Dakota from 1897-1902. He was voted the best orator of the University in 1900, and also worked for the school newspaper. He was suspended from UND in 1902, for failure "to attend his duties," and for being a prankster. All was forgiven by 1930, as he was reinstated and awarded an honorary Doctor of Law degree. After leaving UND, he went to the University of Iowa and graduated with a degree from the School of Liberal Arts (1903) then attended Harvard, graduating with a Mast of Arts degree in 1906. He did extensive research in Canada, Alaska, Antarctica, and Arctic regions. (Information from OGL #81)