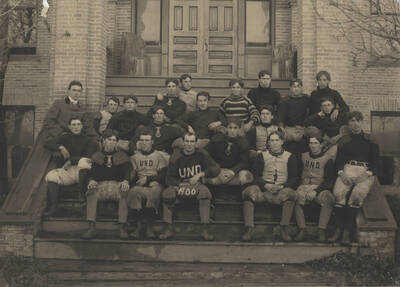 Depicted on a stoop with double wood doors and two wood chairs, 21 players from the 1900 football team are sitting in their uniforms. Holding the "1900" football is Lynn Frazier (captain). Behind him in the center is Joe Flanagan, while Victor Wardrope is to Frazier's left, and William Lemke is to his right. A new football coach was brought in, Victor L. Littig, who stayed for only one season.