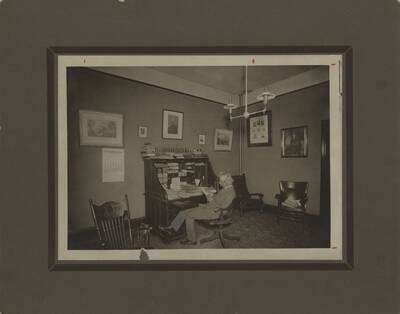 Guy Corliss, the first chief justice of the North Dakota Supreme Court, was hired as the Dean of the Law School (1898-1903) and Professor of Law (1898-1912). He then moved to Portland, Oregon, where he served on the faculty of Northwestern College of Law for 23 years. He died on November 24, 1937. Guy Corliss is sitting at his desk in his office that is filled with papers and books. Hanging on the wall are seven various pictures and a calendar. There are three other chairs located in the room and a lighting fixture hanging from the ceiling.