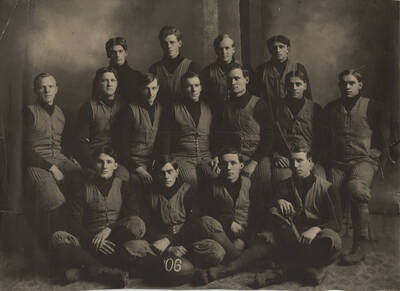 Fifteen football players pose for a photograph. The "06" ball is in front of J. Marshall Brannon, who played right half back. In 1906, UND tightened its eligibility rules to require that every athlete pass twelve hours of course work in two successive semesters before being allowed to compete. UND also refused to schedule any school that did not observe a similar requirement. Olger Burtness served as the captain of the 1906 team.