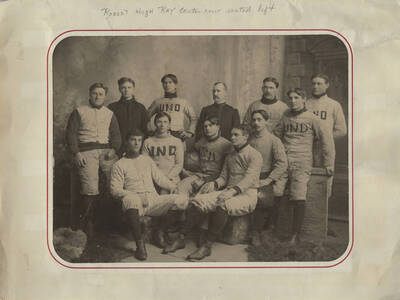 Twelve players are pictured from the 1896 football team. Six players are wearing uniforms with UND on them. Behind the player holding the '96 football is Lieutenant Charles S. Farnsworth, the coach, in his military uniform. Also on the team are Benjamin Wright (captain) and Joseph Flanagan, later to be named the university's greatest athlete in its first fifty years. Also identified is Robert Hugh Ray, center row, seated left.