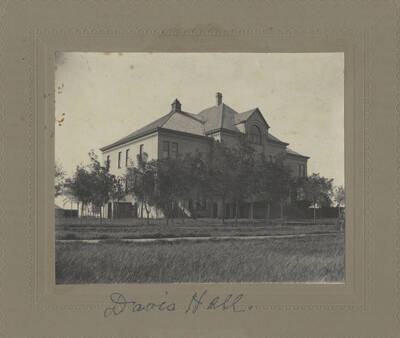 Davis Hall with a sidewalk and row of trees running in front of the building. In the bottom right corner is the wheel of a bicycle. The building has a basement, two stories and an attic. Ladies Hall was built in 1887 and renamed for Hannah E. Davis who had been the preceptress/matron for all the women students. From its construction, the President of the University lived in the hall until the completion of the President's House in 1903. The University dining room occupied the basement until the completion of the University Commons in 1911.