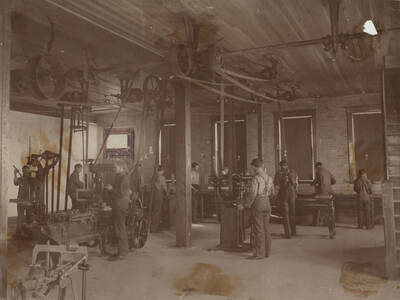 11 students work in the Machine Shop at a variety of large machines. On the far wall is a door and four windows with shades drawn closed. Single bare light bulbs hang from the ceiling. In 1902, construction began on a building just north of the Power House to be occupied as an engineering building with drawing rooms, recitation rooms, shops and labs. Calvin H. Crouch became Director of the College of Mechanical and Electrical Engineering.