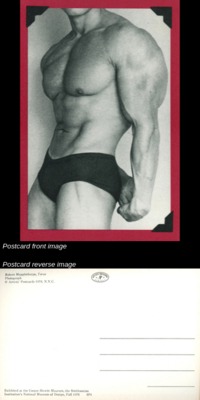 Robert Mapplethorpe was born in 1946 in Floral Park, NY. Mapplethorpe attended Pratt Institute in 1963 were he obtained his BFA in painting and sculpture in 1970. Mapplethorpe did not originally intend to become a photographer, originally he made collages that incorporated images of men from pornographic magazine with some found objects and his painting. He is best known for his photography of still lifes, homoerotic images and portraits. Robert Mapplethorpe has work in the permanent collections of the Guggenheim Museum, the Tate Museum and several others.

Black and white photograph of a muscular man in black underwear holding his arms behind his back, this image is surrounded by a red border on the postcard.