The Conference on Values Takes a Break (Set of 82) 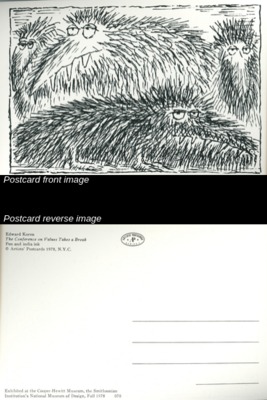 Edward Koren was born in 1935 in New York City, NY. Koren studied at Horace Mann School and Columbia University, he later went on to study at Pratt Institute in 1964 where he obtained his MFA. He is best known for his political cartoons in the New Yorker, as well as illustrations in children's books. Edward Koren has works published in several magazines such as the New York Times, GQ, Esquire, Vogue, and many others. His cartoons, drawings and prints have been exhibited worldwide.

The Conference on Values Takes a Break