Regine and Christine (Set of 44) 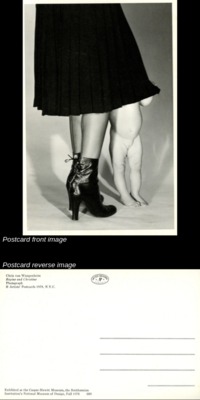 Chris von Wangenheim was born in 1942 in Berlin, Germany. In 1965 von Wangenheim moved to New York City to become an assistant to James Moore, the photographer for Harper's Bazaar. It wasn't until he was discovered by Vogue's Anna Piaggi that got his monumental start. He is best known for his groundbreaking, provocative, and macabre fashion photography from 1968 until his death in 1981.

Black and white photograph of a nude toddler with her head and shoulders under a woman's skirt. Only the woman's legs are shown.