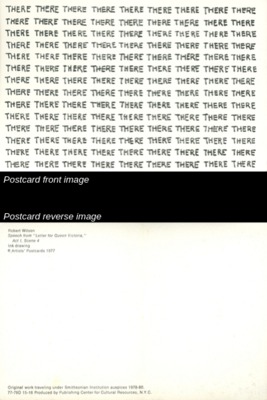 Robert Wilson was born in 1941 in Waco, Texas. He studied briefly at the University of Texas before moving to New York to obtain his BFA in architecture from the Pratt Institute in 1966. Wilson is best known as a director, theater performer, and visual artist (painting and sculpting). "A Letter for Queen Victoria" is a theatrical work written and directed by Robert Wilson in 1974. Wilson used his own play, which critics described as genre-less, as an inspiration for this artist postcard project which was created 3 years later.

A white postcard with rows of the word "THERE" in black handwriting.

Speech from "Letter for Queen Victoria" Act I, Scene 4