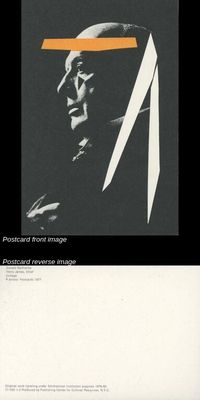 Donald Barthelme was born in 1931 in Philadelphia, Pennsylvania. Barthelme is best known for his short-stories and later in his career he moved on to create post-modernist collages. His collages were parallel in style to his short stories by means of fragmented figurative language which made up a short story and then a collection. The postcard "Henry James, Chief" was inspired by the American writer Henry James. James was a key figure for the transition from literary realism to literary modernism, and a personal idol for Donald Barthelme.

Black and white photograph of Henry James with several white and orange shapes added around his head.