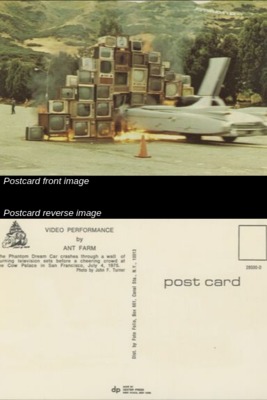 Photograph taken by John F. Turner. Made by Dexter Press, and distributed by Foto Folio.

Ant Farm was created in 1968 in San Francisco by two architects named Chip Lord and Doug Michels who were later joined by Hudson Marquz and Curtis Schreier. The group was focused on combining architecture with performance art, sculpture, graphic design and media. The works of the group functioned as social critiques of the cultural time period of post-World War II and the Vietnam war. Ant Farm was one of the first groups to address television's problematic presence in everyday life.

The Phantom Dream Car crashed through a wall of burning television sets before a cheering crowd at the Cow Palace in San Francisco, July 4, 1975.

The Phantom Dream Car crashes through a wall of burning television sets before a cheering crowd at The Cow Palace in San Francisco, July 4, 1975.

Postage square on upper right hand corner of postcard. "post card" is printed below it.

A vertical line is located in the middle of the postcard that reads: