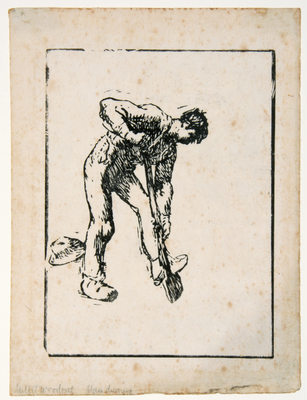 Jean-François Millet, a major painter of the Barbizon School in rural France, may be described as a Realist because his art rejected themes favored by Neoclassical and Romantic artists of his day. Millet’s subjects dealt with the “here and now” and not with ancient mythology or romantic views of distant lands.

The artist was best known for his images of hard-working peasants, whose enthusiasm for strenuous labor was often idealized, as seen in the woodcut on display that depicts a digger at work.